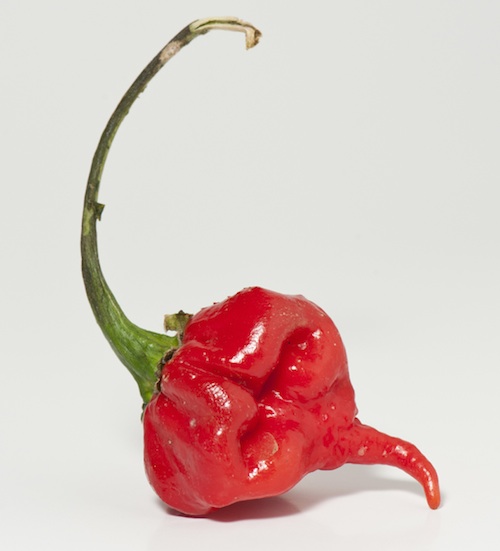 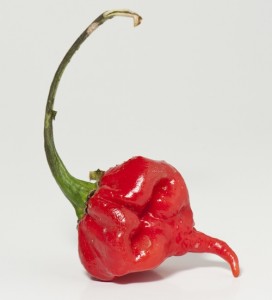 The Packer originally ran this article on May 10th. Thanks to Sarah Krause, the author, for letting us run it again here.

Some like it hot. And some like it really hot. Superhot varieties of peppers are gaining in popularity and making a space for themselves in the hot pepper market along with their popular pepper cousins, the jalapeño, serrano and habañero.

Spicy peppers run the gamut from relatively mellow to tear-inducing, and with more than 400 varieties worldwide there are many to choose from.

According to The Packer’s Fresh Trends 2012 data, 27% of customers bought specialty peppers within the past 12 months.

Superhot varieties — such as the scorpions — are the name of the game for Marlin Bensinger, member of The Chile Pepper Institute at New Mexico State University and farming and technical director and owner at Chromtec LLC, Las Cruces, N.M. Bensinger, who’s been in the hot pepper business for 45 years, said he grows six or seven Trinidad varieties and 10-11 other varieties.

He grows the Trinidad moruga scorpion, which as of this February, was listed as the world’s hottest chili pepper at more than 2 million Scoville heat units.

“We’re finding the desire for peppers that are super hot is going up each year,” Bensinger said. “We sold everything we could produce last year.”

His growing partner, Dave DeWitt, also a member of The Chile Pepper Institute and president of Sunbelt Shows Inc., which produces the National Fiery Foods and Barbecue Show in Albuquerque, N.M., agreed.

“This past year was a breakthrough year for fresh-market superhot chilies, namely those chilies that measure between 500,000 and 1.2 million Scoville heat units. We had a 1.2-acre field in Las Cruces (N.M.) growing Trinidad scorpions and its subvarieties, plus Scotch bonnets, and we sold every pod harvested,” DeWitt said. “We were getting $16 to $18 a pound for the hottest ones, and all I had to do to sell them was send out e-mails to my (customers).”

Uesugi Farms also grows the superhot bhut jolokia chili pepper — also known as the ghost pepper — which not long ago held the title of world’s hottest pepper. It claims to be 400% hotter than Tabasco sauce.

“It’s a pretty cool niche and still has a very big following,” Barkdull said of the ghost pepper. “We don’t have any problem selling it.”

He added that more competition springs up every year, but the pepper’s longer growing season (five to six months) and the chance of getting faulty seed makes it tricky to grow.

“Probably 80% of the bhut jolokia seed available on the open market are imposters,” he said.

Hot peppers began coming out of California in May and will continue into July.

“Production (of hot peppers) has steadily increased over the last six years,” he said. “As people get used to spicy flavors, it keeps increasing interest for hotter peppers.”

The farm plans to add about 15% to its hot pepper production this year. Harvest out of Ohio will start around the first of August.

In New Mexico, Bensinger expects harvest of superhots to begin in September, while other specialty peppers run May through October and longer out of Mexico. The New Mexico green chile harvest begins in late July.

Bensinger added that because demand has been so strong, he plans to add acreage at his operation and grow peppers in a greenhouse for the first time.

“We have people who want peppers year-round and are willing to pay the higher price.”

For Bensinger, the most popular peppers he grows are the Trinidad varieties, mostly for specialty markets and the foodservice industry.

“That would be a valid user of these peppers,” he said. “You probably won’t see them go into the public supermarkets, but as people start to understand the heat mechanisms and respect them, they’ll get more comfortable with hot peppers.”