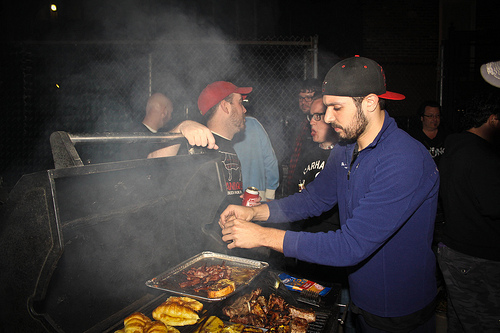 Remember when “meathead” was a slam Archie Bunker aimed at his son-in-law? Now the meatheads have their own club, of sorts: ManBQue. The brainfart, er, brainchild of 34-year-old Chicagoan Jesse Valenciana, ManBQue evolved over 6 years from a handful of friends getting together, to a nationwide organization with chapters in Boston, Connecticut, Nashville, Los Angeles, and Texas, to name a few. Members get the lowdown on monthly ManBQue “meatings” via their page on Facebook.  They’ve got a great website at www.ManBQue.com, with some hilarious posts about charring meat, brewing beer, and other manly pursuits. Think of this as the next evolution of guy-centric groups like the Elks…except that now you eat the elk. 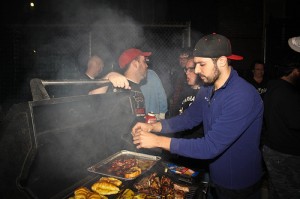 At ManBQue, the meat’s the thing.

The weekday gatherings are for dudes only, but gals can go to the weekend events. According to the official Manbque rules, “weekends are for Coed B Ques where there is a slight chance of actually going home with a woman.” Other rules include the following gems:

These Meatings look like a hell of a lot of testoterone-charged and alcohol-fueled foodie fun. Here’s a video montage that pretty well says it all: 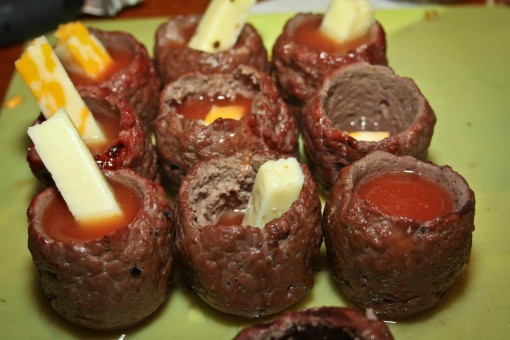 1.Cook bacon, I used a microwave with paper towels to absorb the excess fat.
2. Place bacon into vodka. Seal and let sit for 7-8 days.
3. Place vodka into the freezer for 2 hours, to allow the fat to coagulate.
4. Strain vodka through a cheese cloth to remove fat.
5. Strain vodka 1 or 2 more times through a coffee filter

If you’re too damn lazy to make this yourself, get a bottle of Bakon Vodka.

Meat Shot Glasses
Equipment:
Stainless steel shot glasses with no logos or designs on them (unless you don’t mind toxic fumes).

Steps:
1. Blend all of your ingredients together in a medium bowl.
2. Make 8-1/8 lb. balls of your mixture (heh, heh, we said ‘balls’).
3. Gently pack the meat around the shot glass, make sure it gets around the whole glass and has no punctures or breaks.
4. Place on the grill, open side down.
5. Evenly sear the meat around the glass then place them on the top rack of the grill for about 7 minutes.
6. Fill your shot glasses with homemade bacon vodka, or use the vodka to make a bloody Mary.