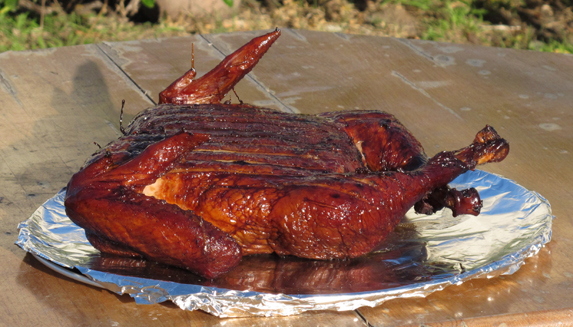 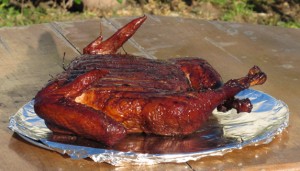 People have been stuffing animals into other animals since at least Julius Caesar’s time, some in very unnatural combinations. Sometimes for cooking, sometimes.. not. In this case, we’re sticking strictly to the PG-rated culinary variety . After the Romans had their way with beast and fowl alike, French charcutiers made wildlife-filled galantines and terrines to entertain kings and other nobles. About 25 years ago, Chef Paul Prudhomme got credit for shining the public light on a modern version—turducken.

Most of you probably know what it is, but for those who don’t, it’s a chicken, stuffed into a duck, which is then stuffed into a turkey. The chicken usually has Cajun stuffing inside, and other types of stuffing are often used as mortar between the various poultry building blocks as well.

If you are into poultry architecture and want to build one, you have to de-bone all three birds first, making sure not to cut the skin on the turkey while doing so. Once that’s done, you stuff them together, then use cooking twine to keep it as a cohesive unit, coat it with seasoning, and you’re ready to cook.

Or you can do what I did.

There are several companies that make turduckens that you can order online. They usually start at $55.00 but the overnight shipping runs the price up another $80. What you’re really paying for, though, is that most valuable of holiday commodities—time. All of the prep is done for you, leaving you only the work of thawing the beast in the fridge, heating the oven, and cooking it. You may be able to avoid the shipping cost by hunting your local market. Chains like Bristol Farms have frozen turduckens like the one I used: Cajun Stuff’s Semi-Boneless Tur-Duc-Hen. It weighs 10 pounds and comes with Cajun-style pork sausage stuffing in it. All you have to do is thaw and cook the thing. Thawing takes 2-3 days in the refrigerator, after which it spends 4 hours in the oven. Provided, of course, you’re one of those people who obeys traffic laws and always follows the directions. If so, read no further and go back to wearing a helmet in the shower.

For those of you with scars and memories of getting your tongue stuck to metal in winter, read on. People smoke turkeys all the time. Adding smoky flavor to a turducken seemed like a stand-out winner to me. It also gave me an excuse to throw something new into the smoker, and well, I think we all know how I feel about that.

It took about 6 hours to smoke-cook a 10-pound turducken to the recommended 165 degrees F. for poultry. I put the turducken on a rack and set it on the top level inside the smoker to start with, using a water pan filled 3/4 full with hot water. As it cooks, drippings fall into the pan. You’ll want to save those for turducken gravy later on.

Every half hour, I added in a cup of applewood chips that had soaked for 30 minutes in water. After the first three hours, I moved the bird down to the lower rack, then coated it in olive oil to help it stay moist. The water level had fallen off as well, so I added some more hot water to keep the steam going. Some people recommend covering the turducken in foil at this point, but it wasn’t dry at all, so I didn’t. Six hours after I’d started, the fowl was a rich brown, the meat thermometer clocked it at 165 degrees, and my back yard was filled with the aroma of poultry and apple smoke.

I let it sit in foil for a little while and removed the twine before carving it. Unlike a normal turkey with a breastbone, you don’t cut a turducken along the sides. You slice in cross sections between the wings and the legs. That way, each slice has all three birds and the stuffing in them. Smoking it added another dimension to the flavor that made the turducken really stand out. Personally, I’m not a big fan of duck, but the applewood made it taste great.


Allrecipes.com has a turkey gravy recipe that I really like. You can see the original here, but I’ve added a few tweaks for the turducken gravy I made for this project.

Bring the turducken stock to a boil in a large saucepan. Stir in the soup, and add the pepper, salt, and garlic powder. Reduce heat to low, and let simmer. Warm the milk in the microwave, and whisk in the flour with a fork until there are no lumps. Return the gravy to a boil, and gradually stir in the milk mixture. Continue to cook, stirring constantly, for 1 minute, or until thickened. Be careful not to let the bottom scorch.

Here are a couple of additional recipes—one for smoking turkey, and one for grilling—that put a spicy twist on this old favorite.

Smoked Mexican Turkey with Orange Chile Oil Marinade
Here’s a double Mexican influence—turkeys as well as chiles are native to the Americas. This recipe will work with a breast as well as the legs. If using a whole turkey or breast, increase the amount of the marinade and inject the marinade in the bird as well as baste it when it’s smoking. Use any Mexican chiles such as ancho, pasilla, cascabel, or guajillo. Serve with avocado slices, beans, and grilled corn on the cob along with corn tortillas.

In a pan, saute the chiles and onion in the oil until softened. Add the garlic and cumin and continue to sautee for an additional minute. Remove from the heat.

Combine the chile mixture along with the oil, orange juice, lime juice, achiote paste, oregano, cloves, salt and pepper in a food processor or blender and puree until a smooth sauce.

Make slits in the turkey to allow the chile oil marinade to penetrate. Place the turkey and marinade in a large plastic bag and marinate overnight.

Prepare the smoker using hickory or pecan wood and smoke the legs in 200 degree smoke for 3 to 3 ½ hours or until the turkey is done to an internal temperature of 160 degrees F. If you wish to continue marinating, simmer the marinade in a pan for 20 minutes and brush it over the legs occasionally. When done, remove the turkey from the smoker and brush with the marinade.
To serve, slice the smoked turkey off the legs and serve with the sauce of your choice.

Mesquite-Grilled Turkey Legs with Jalapeño-Cilantro Lime Basting Sauce
This is one of the simpler and quicker ways to prepare turkey. You can add mesquite chips soaked in water to the fire to add a little smoke flavor to the turkey legs. And go ahead, be daring and add a couple of tablespoons of tequila to the sauce. Grill over a fire with soaked mesquite chips added. Serve with hot German potato salad and ranch-style baked beans.

Place all the ingredients for the sauce in a blender or food processor and puree until smooth, adding some water, if necessary, to make a smooth sauce.

Grill the turkey legs over a medium fire, basting regularly with the sauce. Cook for 30 minutes, turning often, or until the internal temperature of the legs reaches 160 degrees F. for medium.