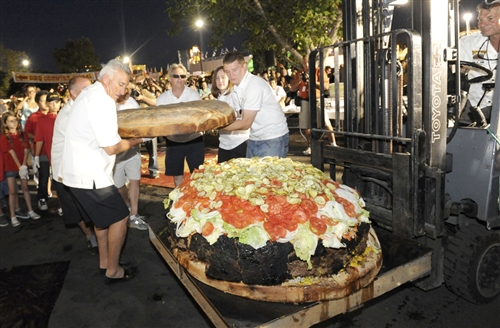 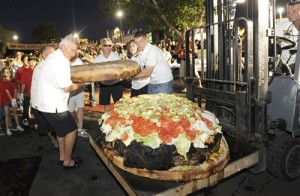 A new Guinness World Record for the World’s Largest Commercially Available Hamburger was set on Saturday, July 2 at the County Fair in Alameda, California. Weighing in at 777 glorious pounds, the mutant “Juicy’s Outlaw Burger” was created by Juicy’s LLC. After a total of 13 hours’ cooking time and the obligatory weigh-in, the burger was split up and shared with fairgoers for 99 cents a serving. Proceeds benefited a local food bank. The world record was previously held by a puny Canadian burger that was 187 pounds lighter than the new champ.

The burger had some pretty impressive statistics: it was 3 feet thick and 5 feet in diameter, with the equivalent of one 600-pound (unlucky) cow ground into the patty. Garnish included 30 pounds of lettuce, 12 pounds of pickles, and 20 pounds of onions, all topped of with a 28-inch-thick bun weighing 110 pounds.

It must have taken some oven to bake that enormous bun, and organizers claimed that the patty was cooked on the world’s largest grill. In a real feat of engineering, the burger was flipped every hour by the 10-person team over the course of 13 hours.

“The old record was held in Canada and we wanted to bring it home to America on the 4th of July,” said team organizer Nick Nicora during an interview with CBS San Francisco.

We congratulate the folks at Juicy’s for the record, with one caveat: while it may have passed muster (or mustard!) by California standards, and it may have been a whopper according to the poofs at Guinness, here in New Mexico we all know that a real hamburger has green chile slathered across the patty!