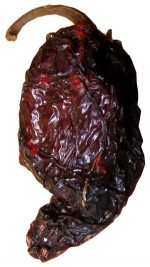 Generally speaking, chipotle in English refers to any smoked chile pepper. The Spanish word chipotle is a contraction of chilpotle in the Náhuatl language of the Aztecs, where chil referred to the hot pepper and potle was derived from poctli, meaning smoked. The word was apparently reversed from Náhuatl, where it originally was spelled pochilli. Other early spellings in Mexico are tzilpoctil, tzonchilli, and texochilli. 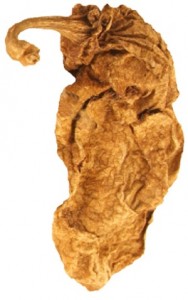 The classic chipotle, Típico, is grayish-tan, quite stiff, and is often described as looking like a cigar butt.

Smoked chiles had their origin in the ancient civilization of Teotihuacan, north of present-day Mexico City. It was the largest city-state in Mesoamerica and flourished centuries before the rise of the Aztecs. Chipotles also made an appearance in the marketplaces of Tenochtitlán, the capital city of the Aztecs that is now called Mexico City. Certain varieties of fleshy chiles, now called jalapeños, would not dry properly in the sun–their thick flesh would rot first. However, like meats, they could be preserved by the process known as smoke-drying.
Bernardino de Sahagún, a Spanish friar who lived in Mexico in the early 1500s, described a dish called teatzin which was served in Cholula in the state of Puebla. It contained a combination of chipotle and pasilla sauces for stewing fresh jalapeños and lenten palm flowers.

Other varieties of smoked jalapeños are often mistaken for the típico chipotle. The most common one is called Morita, shown here.

In 1575, a Spanish visitor to Mexico, Juan de la Cueva, described a dish that combined the seedless chipotles (capones), onions, piñon nuts, and a broth with meat juice and pulque (agave beer). The sauce was simmered with chunks of meat to create pipián de piñon. 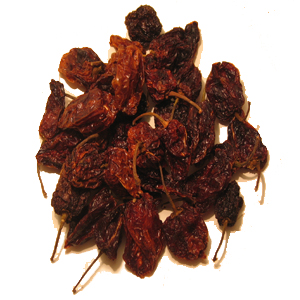 Can you make smoked habanero? You bet.

For hundreds of years after the Aztecs, smoked chiles were found predominantly in the markets of Central and South Mexico, such as Puebla, Oaxaca, Veracruz, and Chiapas. In Huatasco in the state of Veracruz, a salsa called tlatonile made with tomatoes, peanuts, and chipotles has been made for centuries.
For more info on chipotles, check out Dave’s story at Fiery Foods Central.