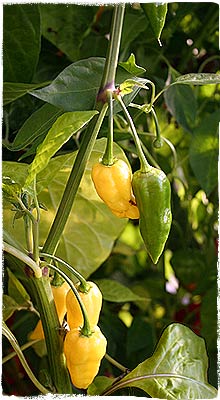 Fatalii peppers and their brethren fall into the capsicum chinense family. Those brethren would be the habanero, Scotch Bonnet, and Red Savina. Family members are generally stealth bombers when it comes to heat: the heat sneaks up on you then drops a bomb in your mouth. That would be because of the high dehydrocapsacin capsaicinoid content. If you’ve ever tried a habanero or a habanero sauce, you know exactly what we mean. If you haven’t tried a habanero sauce, you should. Fatalii, though, is the black sheep that argues with the other peppers at family dinners, going against the grain with an instant burn up front; there’s no getting acquainted first. That follows after the intense heat when the fruity flavor of fatalii steps forward. Thus you have an interesting habanero alternative. The Fatalii pepper originates in Central Africa. 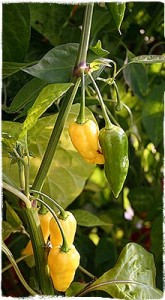 Fatalii plants grow to 20 to 25 inches tall, and plant distance should be about the same. The plants thrive in full sun (and really love living in a greenhouse). They’re are also suitable for containers, which means you can pick the sunniest place around the house and get them indoors before the first fall freeze kicks in (like with all pepper plants, freeze would be fatal to Fatalii). Just don’t overwater the plants–a little stress makes the pods even hotter. The pods grow to 2.5 to 3.5 inches long and about 0.75 to 1.5 inches wide. Starting as a pale green, they’ll turn bright yellow (there are red Fataliis around as well, but the yellow one is the real deal).
The grown peppers are on the thin-walled side and Fatalii pods are easy to dry for later use (if you’re in a humid climate, you may have to use a dehydrator, however). A retired coffee grinder turns dried Fatalii pods into a wonderfully hot and flavorful powder. It should be stored in a cool, dry, and dark place. They also freeze well, but their fruity fragrance is enjoyed best when fresh.