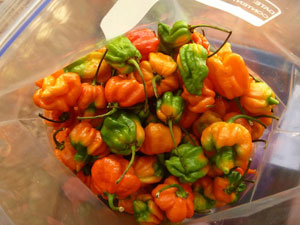 Every wonder how it’s possible to have at least semi-ripe tomatoes in the middle of winter?  It’s because they are picked green for shipping and then gassed with ethylene to cause them to ripen.  Although those supermarket tomatoes are very, very mediocre, we can learn from this industrial technique when the foliage of our non-factory garden freezes, leaving the green fruits of tomatoes and peppers in particular.  And these unripe fruits are not yet producing ethylene, so you have to force them.  Here’s how it works. 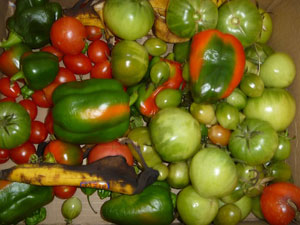 Here's a box of mixed ripening peppers and tomatoes and the ugly but effective banana peels.

Ethylene is thought of as the aging hormone in plants, and it’s responsible for the changes in texture, softening, color, and other processes involved in ripening.  When fruit ripens, the starch in the fleshy part of the fruit is converted to sugar.  Ethylene initiates this reaction.  Fruit produces ethylene in response to bruising or wounding, too, which is why banana peels work so well in the process below—all of those brown spots on an aging banana peel are producing ethylene.

These 'Trinidad Scorpions' were all green before I put them into the ripening box. They had turned orange in about four days, with probably another four to turn red.

All you need for your own ethylene ripening chamber is a cardboard box, some masking tape, some unripe fruits, some ripening fruits, and a few banana peels.  Put all this together, seal with the tape, and check every two days.  Fruits that are definitely turning color, will continue that process until ripe, but leaving them in the box will hasten the process, as they are trapped in atmosphere much richer in ethylene.  So you can easily adjust the duration of the ripening process to the amount of ripe fruits you need for cooking.