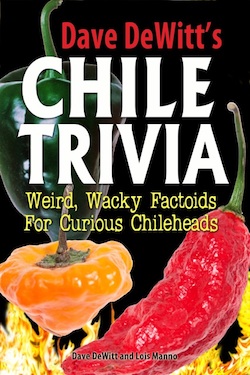 This is an excerpt from the new book Dave DeWitt’s Chile Trivia, which will launch at the 24th annual National Fiery Foods & Barbecue Show, March 2-4, 2012 at Sandia Resort and Casino in Albuquerque, New Mexico.

Maximum Pungency Values of Superhot Chiles as Tested in 2011

Marlin Bensinger, an analytical chemist with his own chromatograph (two of them!) has been growing out superhots in various locations in Las Cruces and Haiti and them testing them. Here are his hottest results for the varieties he tested, except where noted, in thousands of Scoville Heat Units.