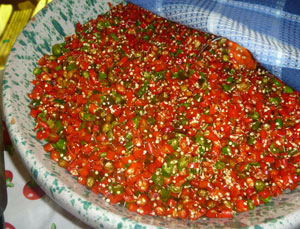 The idea that ten willing victims would attempt the torture of eating nearly the weight of a chihuahua of hot chiles at one sitting in front of a cheering crowd of 2,000 peperoncino-heads may seem strange to Americans. Strange, that is, until you consider the extreme eating contests we have in the United States.  Stuffing down dozens and dozens of hot dogs or funnel cakes while attempting to avoid vomiting is great fun for everyone, right?

Chopped chiles waiting to be devoured by the contestants.

During my 2010 trip to the 18th Annual Peperoncino Festival in Diamante, Calabria, Italy, I had been drafted—despite my protests—into serving as one of the head judges for the chile-eating contest, and my job was to: first, avoid laughing my ass off; and second, to make sure the contestants were not stuffing the chopped chiles into their pockets and shoes. Third, I had to count the number of finished plastic plates in front of each competitor and multiply them by 50 grams to determine total weight of chiles consumed—all while Queen’s “We are the Champions” blared from the speakers at top volume.  And without even a birra to help me through it.

A lady named Anna, the champion from 2009, was in the number one position and seemed determined to surpass her own record of 750 grams.  She got off to a great start, wolfing down with a spoon what seemed to be finely chopped serranos while her fans chanted “Anna, Anna, Anna” to the beat of the Queen song. 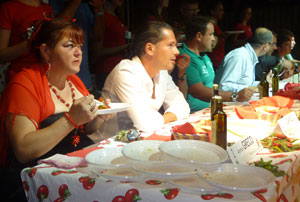 Anna, the determined-looking lady on the far left, was the eventual peperoncino-eating champion.

The competition was not much, and they began to drop like burned-out flies.  One guy ate 50 grams and then ran from the stage, the wimp.  Two more soon gave up with embarrassed looks, as if they had farted during confession.  Anna hung in there, plowing through the peperoncinos, but hey—she outweighed most of the men.  Finally, after fifteen minutes or so, everyone gave up except for Anna, who was now holding her stomach, eleven-and-a-half plates of hot stuff devoured. She slowing way down, her face red and contorted with pain. Was that froth on her mouth?

All eyes were on Anna, and all the TV cameras too.  Would she break the record?  Would she get a medal from the Italian prime minister?  But then, in a shocking turnaround, Anna clutched a napkin to her lips, staggered to her feet, and left the table while bending over.  Anna, it seemed, had lost her peperoncini.  Would she be disqualified?  Would she return to the table, now having more room in her stomach?  To the “Anna, Anna Anna” chants, she did return, but could not continue. Despite the setback, she once again was crowned the champion with a lousy 640 grams, about 1.4 pounds.  I wanted my money back.

Suddenly I remembered the Italian Party Principle: The length of time it takes for a party to break up is directly proportional to the number of Italians there. Once my Italian pal Marco took me to a dinner party where it took the twenty guests about an hour to devour the five courses, but just to say all the goodbyes took another 45 minutes!  I looked around and calculated 35 people on stage and 2,000 in the audience.  We would be there until the Christmas presents were opened!  In the confusion, I snuck to the back of the stage, down the small steps and out to the street—Ciao, baby, bye bye!

I found the nearest bar, and too hell with the birra.  I was soon sipping a whiskey—that’s Italian for scotch.  A reliable witness told me the next day that a half hour after my escape, the host, Gianni Pellegrino, was still asking into the microphone, “Mr. DeVitt, Mr. DeVitt, where are you?”