I recently visited the Houston, TX studio of Eat More Heat, where ultra chilehead James Wreck and his trusty sidekick David Martin produce a weekly live video program focusing on spicy product reviews, with a generous helping of irreverent humor. You can tune into the fun Tuesday nights at 9pm Eastern, 6pm Pacific. We discussed (among other things) the opening of his new Houston hot shop called iBurn, his philosophy about small business, and how things are looking for artisanal sauce makers in the fiery foods industry. Here’s part 2 of the interview.

LM What’s unique about your approach with iBurn that will make you different from other hot shops?

JW I don’t know if there’s another hot sauce shop that’s doing what we’re going to be doing. The focus is normally on getting a good selection, popular stuff, get the stuff that sells, and let the stuff sell itself, like a grocery store. We want to turn this into a personalized shopping experience for everybody who walks in the store. We want to open up a whole new world and make them a part of the chilehead culture. There’s a whole subculture that 99 percent of the United States has no idea about.

LM We know about it and take it for granted because we’re in the business.

DM When I first came into this, my exposure to the variety of products was exponential. You get past the mainstream manufacturers and get out to the Houston Hot Sauce Festival for instance, try one or two things, and you’re like, “oh, that’s so interesting,” then the next thing you know, “this guy makes 200 other sauces? Are you kidding?” It starts to blow your mind in the first few months, how much of an iceberg this industry is. Above the water is this small focused area, but underneath, there’s a plethora of combinations—people with different attitudes about how they want to make hot sauce. Some are very experimental; they want to use the wildest ingredients they can imagine and see what they can do with it. It’s a whole other thing under the water.

LM It can be really overwhelming when you’re trying to navigate through all these products you find online; by taking the time to try all this stuff, you guys will have the knowledge base that one average person can’t possibly get because there’s not enough time. They can rely on you and say, “tell me what I’m going to like, based on this criteria.” That’s perfect.

JW Because of the discriminatory practices of the major grocery stores, people have no idea the amount of products that are out there. We’re going to have access to almost a thousand different hot sauces alone.

JW Right. Salsa’s the number one selling condiment in the United States, so that’s even more popular. Of the maybe 10 brands of salsas that a grocery store might carry if they have a good variety of salsas, there’s literally hundreds of brands out there that people have never seen, heard of, or experienced. I am one of the most anti-corporate guys you’ll ever meet. I think corporations treat people like numbers, like sheep.

LM Of course they do.

JW If you want to enjoy the human experience when it comes to spending your hard-earned dollar, you need to be treated like a person. Any company that doesn’t focus on that, they’re too big. It’s a bunch of mass-produced stuff, and you need to go away. I’ll include TABASCO® in this.  I think when they started they weren’t, because a hundred percent of the chiles that went into a bottle were grown on Avery Island.*

LM They were true tabasco peppers that were grown in the soil from the place.

LM If you cultivated every inch of Avery Island, you couldn’t grow enough tabasco peppers.

DM In general, they use it almost exclusively for seed stock at this point, short of the special reserve stuff that they’ve been putting out. 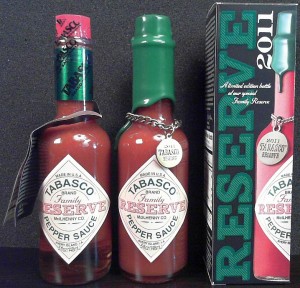 JW Which we just reviewed recently. We bought a bottle of their fancy special reserve crap that was $25. It tastes worse than the stuff you buy at the grocery store. I didn’t like it at all. I really believe that when you’re dealing with large corporations that have hundreds of millions of dollars in sales, they’re more focused on being able to meet the demand for their product, rather than meet the quality standards that were originally established for that product. If we want to be able to show major corporations that this is not how you’re supposed to treat your consumers, then you have to escape from the major corporations, and focus on the small businesses that you love and enjoy. Take that money out of their pockets.

JW You have to punch them square in the bottom line. That’s what consumers as a whole need to do. This gives us the opportunity to pull people away from major manufacturers, but also to try and change the grocery stores’ discriminatory practices with slotting.

LM That’s going to be a tall order.

JW It will. Whole Foods has started a trend in that direction, but your product has to fit in their narrow guideline to go on their shelves. The precedent is there. Whole Foods has shown that it’s possible to have a successful concept using local and smaller companies to supply it. The quality of the products is that much better.

LM And people are willing to pay a little more to get it.

JW Exactly. I sincerely believe that you’re going to see a movement—we’re finding that this mass production, processed garbage that most of the major manufacturers are doing, that makes up probably 95% of the stuff that’s in most grocery stores, is more and more detrimental to an individual’s health.

DM The locavore movement is strong enough and reasonable enough for people to really pay attention. Here’s a classic example: there’s a lady down at the local farmers’ market that makes a habanero goat’s milk cheese that’s stupid good. She would have to fight and probably pay exorbitant amounts to get 3 containers of her product into a cold storage area at her local store. We want to focus on identifying these fantastic manufacturers, and help them grow. We hope to bring them up to the surface for the mainstream public to see. Growing other people while you grow yourself is mentally enriching, to do that.

LM It’s all about acknowledging that we’re all part of the same community.

DM If I go through the local gas station now, I can’t help but see that 30 percent of the stock for snack items have the word “spicy.” But a lot of these people have been stuff like that for years, way ahead of the trend, and their product tastes way better because they put their heart and soul in it. If you can float that stuff up to a level where it’s convenient for the mainstream consumer to get at, I think it’s a no-brainer that they’re gonna go for that. They’ll think, “It might cost a little bit more, because it’s handmade. Forget that mass-produced salsa that I used to buy. That stuff with roasted tomato along with some exotic chile that I’ve never heard of, it’s amazing!”

LM It really comes down to “the proof is in the pudding.” Just taste it. Is it there for you or not? There are going to be some people who have unsophisticated palates, and they’re not going to understand what the big deal is all about. 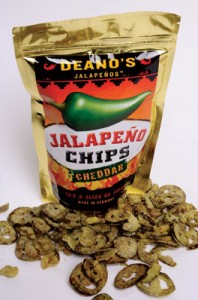 JW We’ll get those people too. I promise you, even somebody who is buying everything in the freezer section, if they walk into our shop and I hold up a bowl of Deano’s Jalapeños, and say, “here, try this,” they’re going to buy a bag. I’ve never given that product to anyone that has said, “I don’t want this.”

LM Right. I’ve had a few people taste it and say it was a little hot for them, but they still loved the flavor.

JW That’s the beauty of this. If you really want to get into the high-end artisan stuff, the “fooshbag” stuff…I call David a fooshbag all the time…

LM (to David) And you stand for that stuff?

DM I’m ok with that. I’ll stand tall as a fooshbag and a brewshbag.

*Disclaimer: The opinions stated in this article by James Wreck and David Martin do not reflect the viewpoints of the editors, Dave DeWitt, or Sunbelt Shows. According to the Tabasco® website, “The pepper sauce that Edmund McIlhenny created in 1868 on Avery Island is much the same TABASCO® Sauce that is produced today, on that very same site. The basic recipe, the process by which it’s made, and the ingredients remain virtually unchanged.”