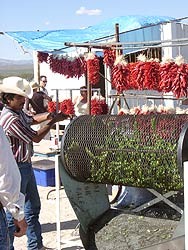 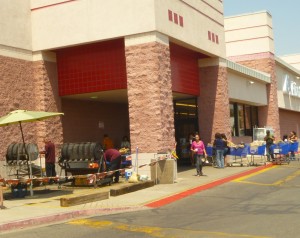 Chileheads Line Up for Roasting at the Albertson’s on Rio Bravo in Albuquerque’s South Valley.

A lot of the media would have us believing that prices for fresh chiles will be outrageous this year. Not so, at least in Albuquerque. Albertson’s is selling a thirty pound sack for $14.88, and then they roast it for you. So, the price for chile is less than fifty cents a pound, which is certainly a fair price for all the joy chile brings to food.

But that same sack will cost you $34.99 if you buy it at an Albertson’s in Las Vegas, Nevada, where the limit is ten sacks a customer. The price is the same for the store in La Habra, California, and the demand is huge. One journalist blogged about the event last year: “It was to be a two-day affair, but when my chica and I arrived Sunday morning around 9 a.m., we were 24 hours too late. According to store management, they sold out of 12,000 pounds of the New Mexican pod in two hours. By six Saturday morn, a line already stretched around the block waiting for the chance to buy 30-pound bags of the stuff. Six tons gone in two hours. Does no one have a life in La Habra?” Sure they do—a good, spicy one!

The price of $34.99 seems to be standard price west of Las Vegas, at the Albertson’s in Burien, south of Seattle, a reviewer noted: “Chiles Rellenos for dinner tonight! This is the only store in the area that brought them to this season. Grown just for Albertson’s. Mob scene in Pasco last weekend apparently, and my sister said they sold out in 3 hours in So Cal 2 weeks ago.”

From looking at the crowds of chileheads buying New Mexico chiles on the west coast, it’s a little difficult to believe the alarmists who keep telling us that the state chile industry is doomed. Farmers will always grow what people really want.

Here’s my recipe for Chiles Rellenos, and it’s really simple, once you have the chiles.