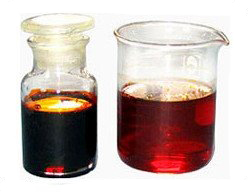 Ever receive a package shipped to you that looks like it’s been dropped under a truck, driven over repeatedly, then brushed off and delivered to you as if everything was just fine? I have. Usually UPS is the culprit, but FedEx has its moments as well. One time I was excitedly anticipating the delivery of a slab of home-cured bacon from Burn! Blog editor Mark Masker. He’d worked on this stuff for a week, using his custom red chile pepper cure. The bacon was coming from Los Angeles to New Mexico via FedEx Priority Overnight. It wasn’t until 3 days later that the styrofoam chest showed up on my porch, containing no remaining dry ice, just a flaccid slab of room-temperature pork. Oh, the horror! Turns out the shipment had been misrouted. FedEx made good on the cost of the ruined meat, but seriously, how can you make up for such an affront to charcuterie?

This is the stuff: oleoresin capsicum, the concentrate from chile peppers.

in Knoxville, TN recently were subjected to a big case of the burns. According to reports, a forklift operator punctured a 5-gallon container of concentrated capsaicin liquid that was destined for a hot sauce manufacturer. Two people were hospitalized, and the rest were ok after they and the area were decontaminated. The destination of the shipment was undisclosed, so we’re not sure whose next batch of sauce is going to be a bit less spicy than usual. This capsaicin concentrate is the same stuff that’s used in creating pepper spray used by law enforcement and in self-protection sprays…it’s potent stuff. Pepper extract is oleoresin capsicum, the concentrated oil containing high amounts of capsaicin. Hot peppers are dried and pelletized, then treated with hexane, which produces a dark red oily compound—the oleoresin.

Here are some additional cases of capsaicin exposure from Dave DeWitt’s Chile Trivia, a book I helped Dave write earlier this year. If you’d like to order a copy of it for yourself, you can find it on Amazon here 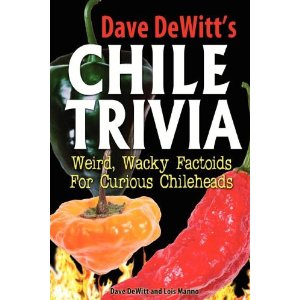 The Spicy Inferno
Thirteen shoppers were hospitalized and the Fallbrook Mall in California’s San Fernando Valley was evacuated when an irritating cloud of smoke filled the mall. Firefighters searching for the source of the fire finally uncovered the culprit: the blackened remains of cayenne chiles in a frying pan.

It seems that a cook at one of the specialty food restaurants in the mall accidentally burned the peppers while cooking them in hot oil and caused considerable panic. Since the smoke from burning hot chiles was once used as a chemical warfare weapon in pre-Columbian South America, cooks should always exercise caution, especially when working with habaneros and other ultra-hot varieties.

Superhot Stuff
Dave DeWitt shared this anecdote: My favorite superhot experience was at a facility in Florida that bottled sauces made with oleoresin capsicum. We were shooting a segment of Heat Up Your Life and we needed shots of the sauce being made. So we had workers dress in total Hazmat gear that make them look like astronauts on the moon, and we faked the superhot-making by using dry ice to simulate deadly vapors.

As it turns out, our fictitious filming was frighteningly close to the truth. For example, when El Pinto Restaurant in Albuquerque was making their new Scorpion Salsa with a Trinidadian chinense that measured 1.21 million Scoville Heat Units, the workers were required to wear respirators, and had to cover all body parts and wear rubber gloves. Even then, the fumes got so bad that the facility had to be evacuated so it could be aired out with powerful fans. It’s not nice to mess with Mother Nature, especially when it involves her hottest progeny.

Police Academy Revisited: Officers Assaulted with Tabasco® Sauce
This is the city: Lebanon, New Hampshire. It’s normally a quiet place, but sometimes people get out of control—especially when it concerns state troopers from Vermont. Michael Towne, 20, a cook at a Denny’s restaurant, was charged with assault for allegedly spiking two Vermont state troopers’ eggs with Tabasco® sauce. If convicted, the penalty would be to two years in jail and a $4,000 fine. Troopers Timothy Clouatre and Michael Manning, who had crossed into New Hampshire for breakfast, complained that the eggs burned their mouths and upset one officer’s stomach. They confronted Towne, who claimed that he had not done the spiking on purpose but that the sauce was residue on the grill from an earlier order. The troopers didn’t believe him and Towne was arrested. According to police sources, Towne, who reportedly disliked cops, was seen by a witness deliberately dousing the officers’ eggs. “We got enough trouble without people screwing around with our food,” groused Lebanon police Lt. Ken Gary.