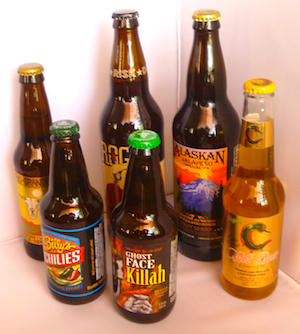 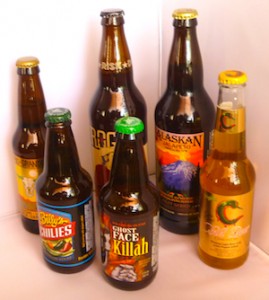 So far I haven’t found a chile-flavored coffee, but there are certainly a growing number of chile-flavored beers, vodkas, and tequilas. I decided to taste-test six bottled chile beers to see if they were just heated-up lagers or whether or not some of them had some respectability. I bought the six beers at Total Wine, which seems to have the largest selection of beers in the city. They were Cave Creek Chili Beer, one of the earliest, now made by Cerveceria Mexicana, so I think this particular beer is simply Tecate with a whole serrano chile added. Two beers came from Twisted Pine Brewing in Boulder: Billy’s Chilies Beer, with five different chiles, and Ghost Face Killah with the tag line “the hottest beer this side of Hell.” From Moriarty came Rio Grande Pancho Verde Chile Cerveza, and in a very large bottle with an imprinted bottle rather than a label was Rogue Chipotle Ale from Rogue Ales of Newport, Oregon. Also in a large bottle was Alaskan Jalapeño Ale from Alaskan Brewing Company.
I recruited my friend and beer connoisseur Ethan Diness to help me taste and rate the beers, and we used a judging sheet from the Homebrewers Association that included points for aroma, appearance, flavor, mouthfeel and heat level, with the latter replacing overall impression. With Ethan’s and my combined scores, there were one hundred total points, and the results were as follows:


Ethan’s and my scores were comparable, usually with only a two or three point difference, and overall, the beers were better that we expected. There’s not much to say about Rio Grande’s Chile Cerveza—the beer was virtually tasteless with a heat level that’s barely discernable. Billy’s Chiles Beer tasted like a highly carbonated cider, and the Alaskan Jalapeño IPA was mildly hopped but had very little chile heat. Ghost Face Killah was the hottest of the bunch but the chile heat dominated the hops and malt way too much.
I was surprised by the Cave Creek Chili Beer. When Ed Chileen (his real name!) owned the company, the serrano chile did not improve the brew itself, which at best was mediocre. I tasted it both here when they exhibited at the Fiery Foods & Barbecue Show many years ago, and also in their cantina in Cave Creek, Arizona, and did not like it. In a strange twist, now that the beer is made by Tecate, it’s actually better! The serrano chile really improved the Tecate-like flavor, which to my taste is a poor excuse for a beer. Now, at least, it’s tolerable. 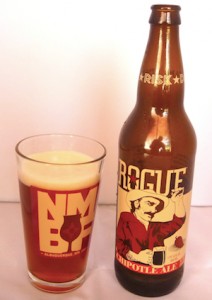 The Rogue Chipotle Ale was clearly the best brew we tasted. Ethan gave it 37 out of 50 points and I gave it a 38. It is actually a chile beer you can sip and enjoy as an ale rather than as some weird mutant served to enliven a party. Ethan liked its “smoky and full” aroma and flavor, and called the heat level “appropriate.” It certainly fits in with the fiery foods and barbecue crowd, both with heat and smoke.
In conclusion, I enjoyed the chile beers more than I expected, but now I’m determined to find a better New Mexican chile beer. We can’t let states like Colorado and Oregon beat us in the chile category no matter what the product.  Any suggestions out there?