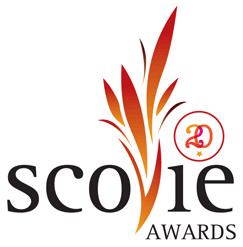 For those of you who are fiery foods and barbecue product manufacturers, you may want to enter the 20th Annual Scovie Awards Competition. Here are some endorsements from previous winners:

We’ve actually had potential customers walk past our booth at the Dallas Gourmet Market and then turn around when we mention our Scovie Awards.  Displaying those awards on advertising and product packaging can help a customer decide if they want to try a product or not.  We are proof that the Scovie Award carries influence in the food world. –Beth Ramsey, Texas Choice, Owner

“I know a lot of seasoning and sauce guys that put ‘award winning’ on their labels and have only really won Gramma’s personal award.  I’ve won dozens of Scovie Awards since 2010 and have been using their coveted logo on our labels ever since.  Using real awards adds a lot more value to your customers and merchants when they’re shopping for the best among the seas of so many new products coming on the market every day.  The Scovie Winner logo is like having a trophy on every bottle.” — Chuck Averwater, President, Smackers BBQ, LLC

Watch the video to see how our awards are judged: