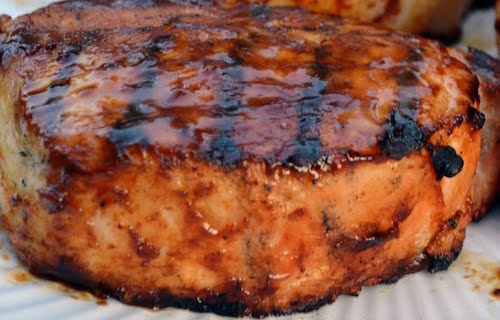 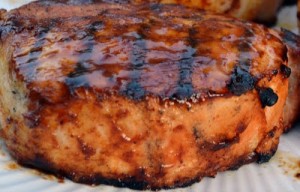 My good friend chef Sue Torres gets credit for this idea. I was going to cook on the Food Network’s “Chopped Grill Masters” a few years ago, and when talking my ideas through with her, she suggested a grilled ranchero sauce. She told me just to grill up everything and throw it in a blender or food processor. This was great advice because you can hide some less desirable ingredients in there while making a great sauce that is perfect for “Chopped.” I didn’t blend it that day, as I wanted it chunky, but it did help me win. Later on, I did the blended version on the show “Food Fighters.” The sauce is great on these chops but would go well on just about any grilled protein.

Prepare the EGG to cook direct at 400°F. To make the rub, combine all of the ingredients and mix well. Season the pork chops liberally on both sides with the rub, using it all. Set the chops aside.

To make the sauce, place the tomatoes, all of the chiles, the bell pepper, and the onion in a shallow pan. Drizzle with 2 tablespoons of the oil and season with 1/2 teaspoon of the salt and all of the pepper. Toss to coat evenly. Place the tomatoes, chiles, and bell pepper skin side down and the onion pieces flat side down on the EGG cooking grid and close the lid. Cook the tomatoes, chiles, and bell pepper until about two-thirds of the skin side is charred. Return them to the pan. Cook the onion, flipping occasionally, until golden brown on all sides. If the onion comes apart, grill the layers until browned. Return the onion to the pan.

Place the tomatoes, all of the chiles, the bell pepper, and the onion in a blender. Add the remaining 2 tablespoons oil and 1/2 teaspoon salt along with the chili powder, cilantro, and lime juice. Blend on high speed for 1 minute, or until smooth. Taste for salt and add if needed.

To serve, spoon 1/4 cup of the sauce onto a plate and top it with a chop.