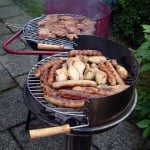 The tabasco pepper is the best-known cultivar of this species, being the primary ingredient in the famous sauce that is now more than 125 years old. Another famous variety is the malagueta, which grows wild in the Amazon Basin in Brazil, where the species probably originated. Curiously, there are not as many names for the undomesticated varieties of frutescens as there are for the undomesticated varieties of other species. The most common name is bird pepper. No domesticated C. frutescens has ever been found in an archaeological site in Central or South America, but ethnobotanists speculate the domestication site was probably Panama, and from there it spread to Mexico and the Caribbean.
At any rate, we know the tabasco variety of C. frutescens was being cultivated near Tabasco, Mexico, in the early 1840s because it was transferred to Louisiana in 1848, where it was eventually grown to produce Tabasco sauce. Demand outstripped supply, and today tabascos are commercially grown in Central America and Colombia and shipped in mash form to Louisiana.
In Louisiana, tabasco peppers fell victim to the tobacco etch virus, but were rescued in 1970 with the introduction of ‘Greenleaf Tabasco,’ a TEV-resistant variety. Today at Avery Island, the site of the original tabasco growing and manufacturing operation, there are still fields of tabasco under cultivation— but mostly for crop improvement and seed production.
An interesting botanical mystery surfaces with the malagueta pepper from Brazil because it has virtually the same name as the melegueta pepper from West Africa. The mystery arises from the fact that the two peppers are completely unrelated botanically and in appearance. The African melegueta (Aframomum melegueta) is a reedlike plant with red berries, while the Brazilian malagueta is very similar to the tabasco chile.

The melegueta pepper enjoyed great popularity during the Elizabethan Age in England, primarily through trade with Portugal. Some food historians believe that because the word melegueta was already a Portuguese term for spicy berry, this name was transferred to a Brazilian red chile pepper of even more pungency sometime after the Portuguese settlement of Brazil. This scenario follows a pattern that Christopher Columbus began when he misnamed chiles as peppers. The chile peppers, it seems, were given the closest common name when
the Europeans were introduced to them. Interestingly enough, the African meleguetas were eventually imported into Surinam and Guyana, where they were grown commercially. Some varieties of C. frutescens found their way to India and the Far East, where they are still called bird pepper. There they are cultivated to make hot sauces and curries.
C. frutescens plants have a compact habit, an intermediate number of stems, and grow between 1 and 4 feet high, depending on climate and growing conditions. Their leaves are ovate, smooth, and
measure 2.5 inches long and 2 inches wide. The flowers have greenish white corollas with no spots, and purple anthers. The pods are borne erect and measure up to 1.5 inches long and .25 inches wide. Immature pods are yellow or green, maturing to bright red. The frutescens species is quite hot, measuring between 30,000 and 50,000 Scoville heat units. The height of the plants depends on climate, with the plants growing the largest in warmer parts of the country. They are particularly good for container gardening, and one of our specimens lived as a perennial for four years in a pot, but gradually lost vigor and produced fewer pods each year. A single plant can produce a hundred or more pods.
The species C. frutescens and C. pubescens have fewer pod shapes, sizes, and colors than C. annuum, C. chinense, and C. baccatum. No one knows the real reason for this. One must remember that the
diversity of pod shapes is human guided. In other words, the differences one sees in pod size and shape are because humans conscientiously made choices about which pods to save for the next growing season. In nature, wild chile plants usually have small, red, erect fruits that drop off easily. The small fruit and easy fruit drop traits are beneficial for bird dispersal. However, humans prefer large fruit and fruit that stays attached to the plant until harvested. Thus, under domestication these traits are modified.
The C. frutescens plant has small fruits that drop off easily. Therefore, an explanation for the lack of fruit shapes in C. frutescens is that it is still mostly a wild form. It is found growing in the same areas as C. annuum and C. chinense, so selection may have been on C. annuum and C. chinense, while C. frutescens had little or no selection.
The most common use for the pods is making hot sauces; they are crushed, salted, fermented, and combined with vinegar. However, the pods can be used fresh in salsas and can be dried for adding to stirfry dishes.

Editor’s Note: This excerpt comes to us via Dave DeWitt’s Peppers of the World. You can pick up a copy of it here to amp up your knowledge base of international chiles.