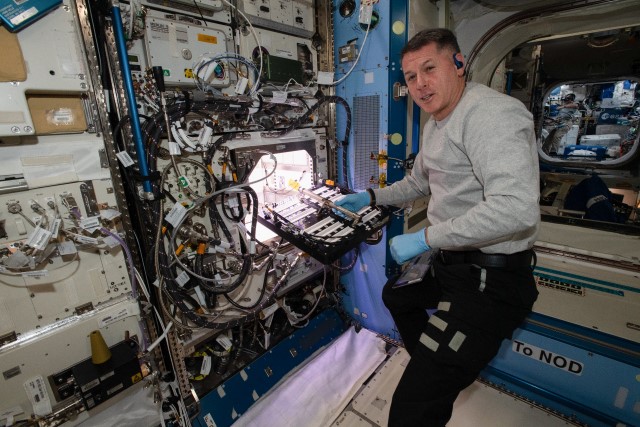 To boldly grow where no pepper has grown before. Last week, astronauts on the ISS planted a batch of hatch chile pepper seeds on board the station. It’s the latest experiment seeking to expand the range of foods grown in space, ahead of any mission to Mars.

NASA astronaut Shane Kimbrough inserts a device called a science carrier into the Advanced Plant Habitat (APH), which contains 48 Hatch chile pepper seeds NASA started growing on July 12, 2021 as part of the Plant Habitat-04 experiment. Astronauts on station and a team of researchers at Kennedy will work together to monitor the peppers’ growth for about four months before harvesting them. This will be one of the longest and most challenging plant experiments attempted aboard the orbital lab.
Credits: NASA

The peppers made it to the station thanks to a SpaceX commercial resupply mission. In a statement, NASA said that “Plant Habitat-04 (PH-04) experiment, containing Hatch chile pepper seeds, arrived at the space station aboard SpaceX’s 22nd commercial resupply services mission in June, and NASA astronaut Shane Kimbrough initiated the experiment.”

Kimbrough, a flight engineer who is part of the seven-member Expedition 65 crew, has previous experience growing crops in space, helping to grow and eat ‘Outredgeous’ red romaine lettuce in late 2016. Kimbrough launched to the space station in April as commander for NASA’s SpaceX Crew-2 mission that brought four astronauts to the orbiting laboratory for a six-month science mission.

The peppers will grow for about four months before the astronauts harvest them for the final time. The peppers can be eaten green but turn red when fully ripe. It is the first time NASA astronauts will cultivate a crop of chile peppers on the station from seeds to maturity. The plan is for crew to eat some of the peppers and send the rest back to Earth for analysis, as long as all the data indicates they are safe for the crew to eat.

“It is one of the most complex plant experiments on the station to date because of the long germination and growing times,” said Matt Romeyn, principal investigator for PH-04. “We have previously tested flowering to increase the chance for a successful harvest because astronauts will have to pollinate the peppers to grow fruit.”

Before selecting a pepper cultivar to grow aboard the space station, researchers spent two years evaluating more than two dozen pepper varieties from around the world. They narrowed it down and selected the NuMex ‘Española Improved’ pepper, a hybrid Hatch pepper, the generic name for several varieties of chiles from Hatch, New Mexico, and the Hatch Valley in southern New Mexico.

This pepper performed well in testing and had the makings of a viable space crop. Read the full NASA statement here.