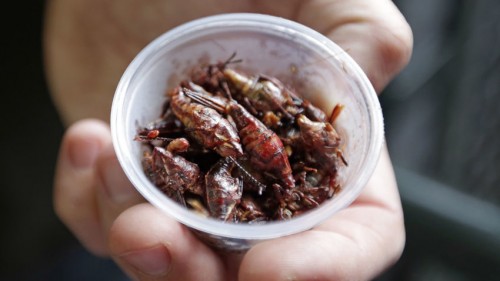 The hot and spicy movement just hit a home run. Baseball stadiums all over the country are offering a wide–and often weird–selections to their fans. Take, for example the photo at left. Those are chapulines, toasted grasshoppers with chili-lime salt seasoning served at the Seattle Mariners’ Safeco Field this season courtesy of Poquitos, a Mexican restaurant in Seattle that serves them. For those fans who like the idea of eating insects, the item proved quite popular, selling out during the opening home series. At Globe Life Park, the Texas Rangers offer the M.V.T., which features a 2-foot hot dog stuffed in a tamale and covered in Texas Chili, nacho cheese and sour cream. But wait–there’s more! Totchos? They’re tater tot nachos, topped with choice of chicken or steak, bell peppers, jalapeños, and a buffalo sauce, with a spicy queso on the side.The Kansas City Royals show off their barbecue prowess at Kauffman Stadium with a pulled pork patty melt that includes onions, cheese, bacon and jalapenos. The bun is made of funnel cake. The San Diego Padres at Petco Park’s favorite snack is the California burrito, stuffed with fries in addition to a protein, sour cream, and salsa. And the White Sox at Guaranteed Rate Field present “The Heater:”  That’s a jalapeno-cheddar sausage topped with spicy cole slaw and sriracha mayo. 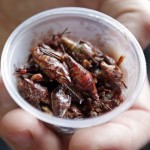 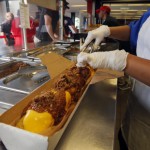 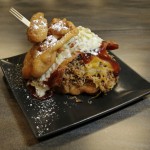