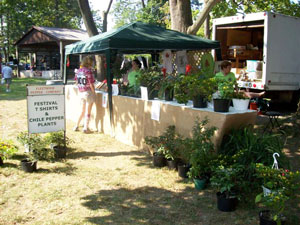 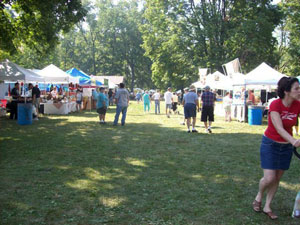 For one weekend each year, tiny Bowers, PA (population: 300 give or take) becomes the hottest place on earth, thanks to its annual Chile Pepper Food Festival held in the town park every September.

Bowers, located approximately 90 minutes northwest of Philadelphia and two hours south of New York City, is situated in Berks County in the heart of Pennsylvania’s Dutch Country. The two gourmands who started a little festival as a labor of love over a decade ago have watched it grow into a must-visit destination for lovers of all things chile pepper.

Chile plants for sale at the Festival.

The first Chile Pepper Festival was held in 1995. Markey joined forces with fellow hot pepper devotee John Bixler, who had been making and bottling his own hot sauce for years. The concept was simple—invite a few vendors to sell their chile pepper-themed products, start spreading the word, and hope that chile pepper devotees would come. And they have. In 2010, Markey estimates that between 8,000 and 10,000 visitors attended. For 2011’s festival, they hope to bring in about 80 vendors. “If it has anything to do with hot chile peppers, you can have a spot,” Markey says. Besides the usual festival fare like salsa, hot sauce, and items with a chile pepper flavor such as clothing and home décor items, expect to find more 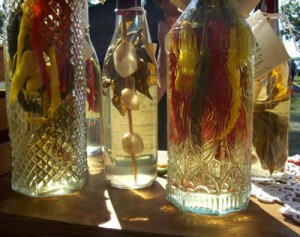 The festival is a great place to purchase chile food products. 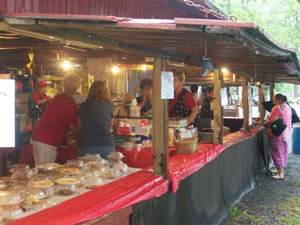 Food vendors at the festival.

unusual offerings, as well. “The vendors sell some unique regional sauces, and also things like pepper bread, hot pepper jelly, and desserts like hot pepper ice cream and cheesecake,” Markey says. The day includes a few cooking demos, a jalapeño eating contest, and a salsa contest. “We judge on texture, flavor, heat, and appearance,” he says. Attendees can also take a horse-drawn wagon to nearby Meadow View Farm to pick their own hot peppers and tomatoes. 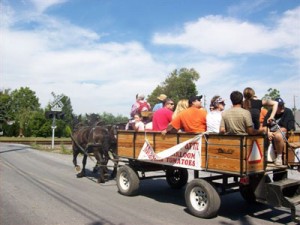 Festivalgoers can take a horsedrawn cart over to Meadow View Farms.

Markey says that the public’s desire for hot peppers hasn’t faded over time, but there are two philosophies when it comes to eating a chile: “The West Coast philosophy is ‘How can I enhance my food with peppers?’ The East Coast philosophy is ‘What’s the hottest pepper you have?’” he laughs. And the public can get those questions and more answered at a certified hot spot—the Chile Pepper Food Festival.
To learn more about Meadow View Farm and the fantastic collection of chile peppers, tomatoes, and other produce grown there by James Weaver, read the SuperSite article here.